The genus Tavaresia, in the family Apocynaceae  has three species distributed in Namibia, Angola, South Africa, Zimbabwe and Botswana. Phylogenetic studies appear to indicate that this genus is closely related to Huernia and other stapeliad genera such as Orbea, Piaranthus and Stapelia.  These succulents live in summer rainfall areas and are somewhat difficult to grow in cultivation.  In their native habitat they prefer rocky outcrops, slopes and sandy areas. In cultivation the plants have to be kept very dry during the winter since they are sensitive to excessive moisture and cold temperatures.  Soil should be very well-drained. 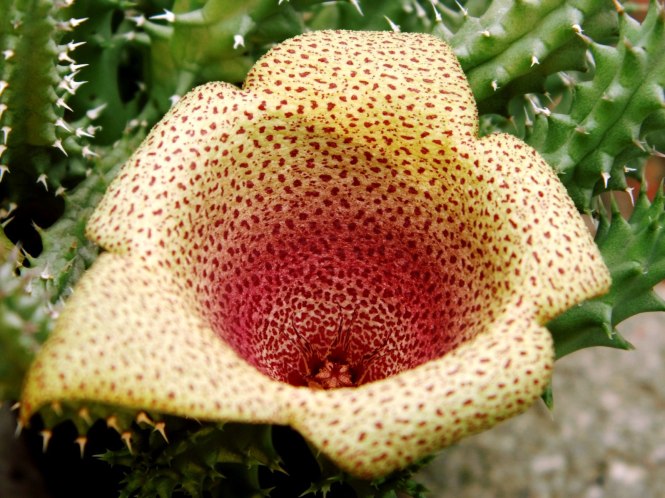 Flower buds can be sensitive and drop easily if touched or if growing conditions are unfavorable.

Tavaresia barklyi resembles a cactus and has a wide distribution in southern Africa.  The stems have many ribs and are covered with numerous thorns that resemble spines.  This species forms distinct clumps with erect or sub-erect (almost erect) stems.  The campanulate (from the Latin “campana” which means bell-shaped) flowers are produced near the base and to the side.  Flowering occurs in mid-summer (November to April).